What the 2016 Election Means for your Business

In the lead up to a presidential election, small business owners often face challenges that are critical to the sustainability and growth of their companies, post-election. Current economic and regulatory standards can affect taxes, credit requirements, healthcare, and countless other aspects of government that can have a direct impact on how you operate your business. Each of the major parties are proposing their own unique solutions to these challenges. If you’re not already educated on each party’s platform, continue reading to find out how they plan to help your business thrive over the next four years.

As her plan reports:
• New business formation has fallen 15% since 2007.
• Small businesses owners cite insufficient access to capital as a primary inhibitor to starting, growing, and sustaining a small business.
• Small business loans comprised just 29% of total bank loans in 2012, as compared with 51% in 1995.

The Democratic Party’s solutions to these problems include the following proposals:

Taxes
• Create a new standard deduction for small businesses as an alternative to the current need to track and file each individual expense
• Allow small businesses with gross receipts under $1 million to take advantage of “check book accounting,” eliminating much of today’s record keeping requirements
• Double tax write-offs for small business investments in things like expansion or equipment purchases from $500,000 to $1 million
• Increase the start-up tax deduction from $5,000 to $20,000 to lower the cost of business start-up

Healthcare
• Simplify and expand the healthcare tax credit for small employers in the Affordable Care Act, so that employers with up to 50 staff would be eligible.

The Republican Party’s proposed solutions include:

Taxes
• Eliminate income and corporate tax, and replace them with one federal consumption tax
• Eliminate the IRS
• Implement the FairTax, which would tax goods and services at a flat 23%

Healthcare
• Delegate Medicaid and Medicare to the states
• Eliminate the Affordable Care Act. Create a free market, pay-as-you-go health care system. It would not cover ongoing health care, but focus on covering catastrophic events and illness

Regulation
• Eliminate government regulation of trade and the economy—including: minimum wage and energy regulation
• Support all free trade agreements (including TPP and NAFTA)

Although each party is approaching individual business challenges differently, all three parties have identified common issues affecting small business and have plans to improve the climate for both new and existing business owners.

It’s important that you consider the impact to business when you vote on November 8th. 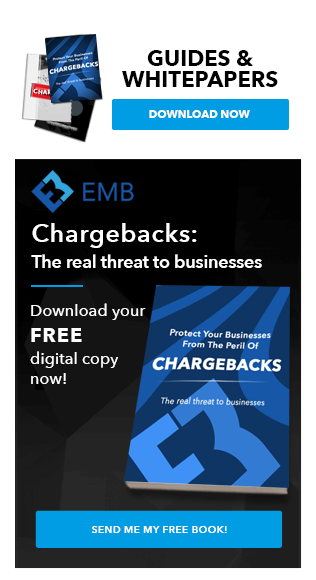 Please fill in this form to create an account

What Are Merchant Cash Advances? +

Having a merchant account allows an account holder to take advantage of merchant cash advances. When a merchant is approved for an advance, the business agrees to receive a lump sum of cash in exchange for an agreed-upon percentage of future credit card sales.

How Much Does It Cost to Process Credit Card Transactions? +

Pricing varies depending on the merchant’s industry, past credit card processing history, the type of business seeking the account, average ticket sales, and average transaction volumes.

Do You Work With Merchants Who Have Poor Credit Scores or Have Had Merchant Accounts Terminated? +

Yes, EMB works with merchants who are building their credit, as well as those who have poor credit. EMB also approves merchants that have no credit card processing history and businesses that have lost their merchant accounts due to high chargebacks.

What Factors Are Used to Determine a Business’ Risk Level? +

Several factors influence a merchant’s risk level. Though only one factor likely will not get a merchant classified as high risk, a combination of these may: business size, location, and industry, credit score, credit card processing history, a industry’s reputation for excessive chargebacks, a prior history of high chargeback ratios, and whether a merchant exclusively sells online.

What is a Virtual Terminal? +

Virtual terminals are stationed on a merchant’s website, making it easy for customers to make a payment or purchase online. Merchants or a payment processor can easily set up virtual terminals, so online businesses can accept credit and debit card and e-check transactions.

What are Interchange Fees? +

How Long Does It Take To Get Approved for a Merchant Account? +

After filling out EMB’s simple online application and submitting any necessary, requested documents, many merchants get approved within 24 and 48 hours.

Do You Work With High-Risk Businesses? +

EMB specializes in working with high-risk merchants. EMB works with many merchants, including but not limited to businesses in these industries: gambling and gaming, adult entertainment, nutraceuticals, vaping and e-cigarettes, electronics, tech support, travel, high-end furniture, weight loss programs, calling cards, e-books and software, and telecommunications.